Read a message from Kyoshi
You are here: Home / Sensei Robert Gabales 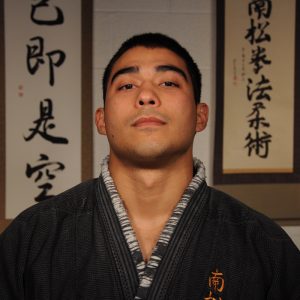 Sensei Robert Gabales was born on 26 August 1986 at Naval Base Rota, Spain. His family moved to the states and eventually settled in Greensboro, North Carolina when he was ten. He began the path of the martial arts shortly after moving to North Carolina being enrolled in the Greensboro Black Belt Academy studying under Master Michael King at their West Market Dojang. He earned the rank of 1st Dan Black Belt under Master King in 1999 and began to put more emphasis on wrestling in high school.

He wrestled for Western Guilford High School lettering in Varsity two years and earning All Conference Honors his junior year. He graduated from Western Guilford in 2004 and attended the University of North Carolina at Greensboro where he reconnected with Master King in Tae Kwon Do and Self Defense courses. In 2006, while training with Master King, he met Jason May Sensei of the Southern Pine Institute of Martial Arts and was introduced to the world of Kenpo Jujutsu.

Shortly thereafter he began training in the Institute’s Arnis de Mano program and began to make connections with the armed and unarmed styles of combat. He continued to train in both arts earning rank in each and was finally introduced to Japanese swordsmanship; more specifically Musō Jikiden Eishin Ryū Seiho Ha Iaido under the tutelage of Jason May Sensei and his teacher of swordsmanship Michael Sullivan Sensei of Bailey, Colorado.

As a deshi of Nan Sho Budokan and training in Kenpo Jujutsu, Arnis de Mano and Iaido; led Gabales to annual martial arts seminars in Colorado to train and eventually earn rank in Eishin Ryū swordsmanship. While training in Colorado, he was introduced to Gao Ren Lu Kempo Gung Fu under the study of Hanshi Ron Carlson and Kamishin Ryu Jujitsu under the study of Soke Don Phillip. Annual seminars led to more exposure to different styles and systems and a completely different look on the martial arts as well as networking and meeting some great teachers.

The cooperative relationship the Southern Pine Institute of Martial Arts began with other schools in Colorado led to several intensive seminars with Hanshi Ron Carlson and Soke Don Phillip as well as Guru George Morin and his Kun Tao Silat. Over the years, the relationship between the Southern Pine Institue of Martial Arts and a variety of other schools and systems grew and the mutual sharing of information between the arts was fostered.

In a six year span of pure devotion and zealous dedication from 2006 to 2011, Gabales Sensei earned the rank of Nidan in Nan Sho Kenpo Jujutsu as well earning is Ikyu in Arnis de Mano and Chuden in Musō Jikiden Eishin Ryū Seiho Ha Iaido. In 2011, Gabales Sensei joined the United States Navy and took his training with him out west to Everett, Washington. He continues training and helping out his fellow shipmates on board the USS Rodney M. Davis in various combat scenarios and martial workshops. The leadership qualities instilled in him through his years at the Southern Pine Institute of Martial Arts forged him into the leading petty officer of his division and a model sailor.