Read a message from Kyoshi
You are here: Home / Guro Chad Bailey 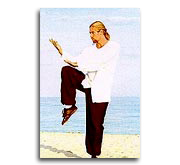 Chad is an expert in Acupuncture, Oriental Medicine, Tai Chi and Martial Arts, who brings an enormous wealth of knowledge and experience to each of his sessions. He discovered the Martial Arts at an early age and began formal classes at age 12 while growing up in rural Pennsylvania. His love for eastern teachings quickly developed into a much deeper passion. Chad’s early instructors balanced self-defense training with healing teaching him shiatsu, tui na and acupressure.

In 1992, Chad began to formulate the many types of Filipino Martial Arts that he had been exposed to into a curriculum. This curriculum needed to bring beginners naturally to intermediate level, intermediates to advanced and advanced to expert in a smooth progression. Hence, Progressive Arnis was born with Modern Arnis as its nucleus. In 2012, The World Head of Family Sokeship Council recognized Progressive Arnis and bestowed the Founder’s Award to Grandmaster Chad Bailey.

He relocated to Miami in 1995 and has been a successful physician and teacher at Shin Wellness (www.shinwellness.com), Miami Dade College and the Acupuncture and Massage College as well as local, national and international seminars. He has been organizing educational and spiritual retreats (Tempered Spirit) since 1992 to sites in the U.S., the Caribbean Islands and Central America. Chad is also a freelance writer being published in Black Belt magazine, Inside Kung-Fu, Fitness 2000, etc… He has recently completed his first book on Arnis, coming soon.