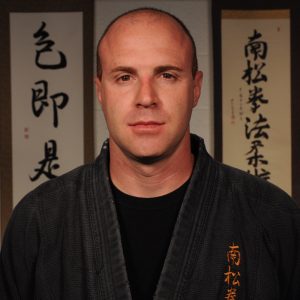 Kyoshi Jason May is Kaicho (founder/chief) of the Nan Sho Budo system and director of Southern Pine Institute of Martial Arts. Since stepping on the path of martial arts education in
Albuquerque, New Mexico in 1985, he has been fortunate to find teachers of various styles to
broaden his skill set and enhance his teaching style.

Kyoshi May is an active member of the Gow Ren Lu Kempo Gung Fu International Association, Progressive Arnis and Kamishinkai International. In years past, he instructed in officer survival tactics for Kentucky Department of Corrections C.E.R.T teams and Greensboro Police
Department. Currently, he continues as a guest instructor at seminars around the United States, Spain and Portugal.

He earned an Associate of Arts from Guilford Technical Community College, a B.A. in Psychology, a B.S. in Business Administration and a Disciplinary Honors Certificate in International Business from Lloyd International Honors College at the University of North Carolina at Greensboro.